Roger Lucas, one of the UK’s top sound recordists, has been using Panamic boom poles from as far back as he can remember and rates them as the best in the business. 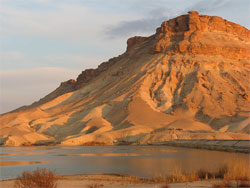 Roger has used the poles in the widest variety of challenging locations and on some of the UK’s favourite TV shows. He is about to put his Panamics through another gruelling shoot in the Syrian Desert.

The last time he was out in the Middle East, the powder-like sand to be found in the desert presented the Panamics with perhaps their most arduous environment. The joins for each of the extending sections were subjected to what amounted to nothing less than a fine grinding paste during their use. We are delighted to say that Roger’s boom poles coped admirably and then came back for more a few days later in the extreme conditions to be found in the tundra of Northern Canada at minus 20 degrees C.

He is so happy with his Panamic kit that he simply won’t use anything else and tells anyone who will listen about their build quality.

“They operate with virtually no handling noise at all” he said. “But it’s not just that, they really do take the knocks.”

He went on to say,

“I also do some work at a college and they bought some other manufacturer’s products. After the media students had the booms for a couple of terms they were falling apart so the staff came to me to ask what would last. I had no hesitation in recommending Panamic’s equipment.”

Roger has also found innovative uses for the poles. He has attached mini cameras and used them to shoot difficult to obtain footage in cramped or confined spaces. The kinds of places where a human cameraman, or even just their arm, simply cannot operate within.

Over the years Roger’s speciality has become historical documentaries and he is currently half way through filming an epic, multi-part documentary for the BBC on the history of Christianity, warts and all. This is the reason for his trip to the Syrian Desert. The series will be screened over several weeks during 2009. Filming has entailed travelling to all four corners of the globe and his trusty Panamics have gone with him.

Roger Lucas has been in the industry since the mid seventies, starting with the BBC in London before moving to Manchester and finally going freelance in the nineties. He has been responsible for recording sound on some of our favourite programs for the BBC, Granada and independent production companies including The Travel Show, Timewatch, Ancient Voices, Battlefield Detectives and Most Haunted. His work has also featured in a catalogue of documentary productions. He captured the sound on the seminal footage of HRH Diana Princess of Wales during her trip to Angola to highlight the calamitous effects of the use of land mines in the late civil war there and in other conflicts. This film led directly to the British Government taking one of the lead roles in a worldwide campaign to ‘outlaw’ their use.