“I have used Panamic boom poles my whole career. On occasion I have been forced to use other brands just because they were all that were available at that moment and I can honestly say they are just not the same.”

The sound on newly released film ‘The Boat That Rocked’ was recorded entirely with the aid of Panamic boom poles.

Simon Firsht the boom operator on the production is a career long Panamic fan. The film is a comedy written by Richard Curtis celebrating the pirate radio stations of the sixties which broadcast pop and rock music to the UK.

Simon used the Panamic 4 section Maxi boom for the duration. He says it is the essential tool for any format but especially when shooting in 235. This very wide format is the norm in today’s film making and the effect is stunning for the viewer. However this presents the boom operator with the problem of how to keep the boom and microphone out of shot now that so much more is visible on the screen. The 5m length and light weight of the 4 section Maxi makes it perfect for the job.

Because of the length and adaptability of the 4 section Panamic pole, Simon uses nothing else. “I have used Panamic booms my whole career. On occasion I have been forced to use other brands just because they were all that were available at that moment and I can honestly say they are just not the same.”

“I keep a couple of Panamic spigots handy attached to different mics in the shockmounts and just switch them over during shooting depending what the set up requires. I normally use the new Schoeps CMIT or my trusty Sennheiser MKH60 microphones.”

“The minimal handling noise of the Panamics and the simple, light and strong design means they beat all the others I have come across hands down. All the parts are readily available and they are just so easy to maintain. When they get dirty I only need to use clean water and they’re ready for the next production.” 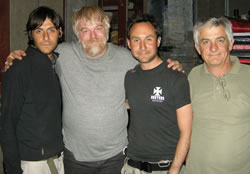 Simon Firsht is a well respected sound recordist and boom operator working in film and TV. Amongst his credits are the films; The Boat That Rocked, Behind Enemy Lines, Shanghai Nights, Around the World in Eighty Days, The Flight of The Phoenix and Nil by Mouth. TV programs have included; Ladies of Letters, Channel 4’s Cutting Edge series, BBC’s Human Face and Dennis Potter’s Karaoke.

The Boat That Rocked is a homage to the pirate radio stations of the sixties the likes of Radio Caroline, Radio England and Radio London that began the careers of household names like Dave Lee Travis. Tony Blackburn, Johnnie Walker, Tommy Vance and many others. There were no stations in the UK regularly broadcasting pop and rock music and the pirate radio stations filled a very real demand in the market. Because of British telecommunications laws they were forced to broadcast from offshore, frequently employing old ships or structures such as Sea Forts outside British Territorial Waters.