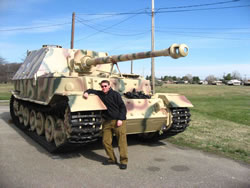 Paul Adlaf, the award winning Canadian sound recordist from Toronto is the sound man for the show and swears by  panamic. Tank Overhul was filmed at The Imperial War Museum at Duxford in the UK.

The series Tank Overhaul follows teams of military historians and enthusiasts as they restore military vehicles of historical interest. In the first series they covered work on several WWII tanks, a Sherman tank, a German Panther a British Comet, a US M18 Hellcat tank destroyer, a German Elefant, all of which anyone with even a minor interest in recent military history would have heard of.

About Paul and the Panamics he swears by

Paul is a specialist documentary sound recordist although he has also tackled several feature films. He regularly uses a Panamic Mini boom 5, Midi boom 4 & Maxi Boom 4 in his work and swears by the quality of their design. Almost all of the sound recording on the Tank Overhaul series uses boom recording employing Panamic booms. Paul has tried several competing products in the past and described them as “…so substandard…” in comparison to Panamic’s booms and accessories.

Paul operates with production crews all round the world wherever his services are needed and has used his Panamic booms in China several times in the last year on Iris Chang – The Rape of Nanking, not to mention in productions in, India, Mexico, Europe and right across North America. A hefty testimony to the products’ durability and effectiveness in use. Paul also won a Genie award (the Canadian equivalent to the BAFTA) for his work on the feature film Love Come Down.