My profession started whilst I was working in a bike shop. I was earning some extra money as a mechanic whilst waiting to start my sound engineering course at the BBC. One day a customer came in to buy a bike and whilst chatting, he let slip that he too was a sound engineer for an outside broadcast company. When I mentioned that I was planning to go to the BBC, he invited me to spend a day on a TV shoot. That day was a real eye-opener, and I made a real nuisance of myself, quizzing all the crew about their respective jobs. At the end of the day, whilst helping the crew de-rig, the sound engineer asked me if I was interested in doing some part-time sound assisting. I couldn’t believe my ears and eagerly accepted. I quit the bike mechanic job and started going out on OBs covering sports events and live news broadcasts. After about 6 weeks, I was offered a full-time job, but was hesitant about accepting it, because I was still planning to go to the BBC. The sound engineer then explained that he was an ex-BBC graduate, and knew exactly what I would be studying in the first year of the course. He recommended that I deferred for a year, to gain some hands-on experience with his company first. Then, if I still wanted to go to the BBC in 12 months’ time, I could, having racked up a whole wealth of knowledge in the process. So I thought, what have I got to lose and accepted his offer.

On my first day of work I was cleaning camera cables in the warehouse, when my sound supervisor came up and asked whether I had a passport and a driving licence. I said yes to both, to which he replied, ‘OK, Michael Caine and Steve Martin are currently in the South of France making a movie called Dirty Rotten Scoundrels, so I’m sending you there next week to interview them for ABC’s Good Morning America’. He then thrust a field mixer, shotgun mic and pair of headphones into my hands and said, ‘You’ve got a week to learn how to use these’. That was the start of my sound recording career.

My time with outside broadcast company Telegenic was one of the most valuable apprenticeships I could have ever had and I ended up working for them for nearly 4 years. During that time I learned not only about sound engineering, but all aspects of TV production, from camera-operating to editing, as well as skills in maintenance and wiring. Probably the most essential skill I learned was the art of getting along with people – something that simply cannot be taught. My bosses were legends in the OB world, well-respected and technically brilliant, and through their mentoring I transformed quickly from an extremely green 18-year old sound assistant into a responsible sound engineer. By the time I left Telegenic, at the age of 22, I had already worked on projects such as coverage of the 1988 Lockerbie air-  crash and the first ever live broadcast from inside the Kremlin for ABC News, as well as BBC comedy shows like ‘Red Dwarf’ and ‘Alas Smith & Jones’.

In 1993 I travelled to Hong Kong, where my life in natural-history documentaries began. A chance meeting in the street with a BBC wildlife cameraman, led to me becoming his sound recordist. One of the first documentaries we made together was ‘The Secret Life of Seahorses’. Just like my first day in TV, I had to literally dive in at the deep end, learning to scuba dive before spending 3 weeks on a tiny island in the Philippines, filming seahorses underwater. I also had to learn quickly about seahorse behaviour. The film focussed on the work of marine biologist Dr Amanda Vincent and her tireless efforts to help raise awareness of seahorse conservation. I had never even seen a seahorse in the wild before, but after spending 3 weeks observing, wrangling and filming them, I was entranced. The film was awarded Best Conservation Film at the Wildscreen Film Festival in Bristol and launched my career in natural-history sound recording. Several wildlife producers then approached me about new projects. Ever since I was 6 years old I had been fascinated with the natural world and suddenly here was an opportunity for me to pursue my passion. 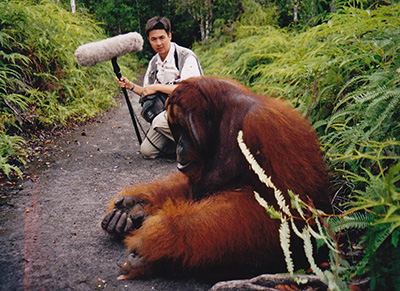 Mark Roberts and the Orangutan

After that, I spent nearly a year in Indonesia, filming a 3-part ‘Natural World’ for the BBC. One memorable sequence was filming Orangutans in Borneo, and it was where I had my first close encounter with a wild animal. I had been following a big male Orangutan called Kusasi for over a month and we had become quite used to each other. Although he could cover much greater distances by brachiating through the tree-tops, he also spent a fair bit of time on the ground, foraging for termites and beetle larvae inside dead logs. During these feeding sessions, when Kusasi was pre-occupied, I would crouch only a few feet away, recording his slurping and sucking sounds as he hungrily hoovered up the bugs. Suddenly, as I was looking down at my mixer, adjusting the sound level, Kusasi reached out with one of his incredibly long arms, gently but firmly grabbed my wrist and then slowly pulled me towards him, until I was like a baby in his arms. At nearly 400 lbs, Kusasi had formidable strength, and his hands were like huge bunches of bananas. My heart was pounding, but I knew that it was futile to try and escape his grip, so I just remained calm, whilst the rest of my crew ran around in circles, not knowing what to do. After what seemed like an eternity, but was actually only about a minute, one of the crew threw down some pieces of water-melon close to Kusasi. The trick worked and he released his grip, preferring the sweet taste of fruit to a sweaty human! 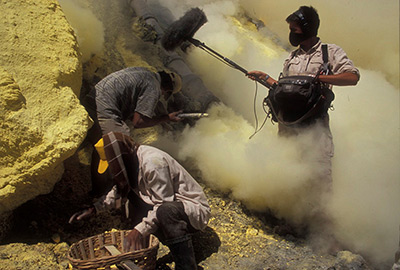 Mark Roberts: Life and Lost Land of the Volcano

As a field recordist, the key attributes of my sound equipment are audio quality, portability and reliability. Many of the places I visit are very remote, and so it’s essential that the kit works in all conditions, without fail. And if it does break down, then I need to have a plan B in place, because there’s no running back to the store room or ordering things online. That’s why my training in repairing equipment and cable wiring was so invaluable. I may have failed physics at A’ Level, but remembering Ohm’s Law definitely has its uses!

Location sound recording is a subtle balance of improvising and compromising. Often there is no time to rehearse, so you need to make sure that your equipment will work first time. That means that as a sound recordist, you are constantly checking your set-up, making sure cables are connected properly, or that you still have plenty of battery life. When choosing new equipment it’s important to run through in your head the various scenarios that you might be expected to use it in, before purchasing it. There is now a bewildering array of cameras being used on productions, and often the audio connectivity is pretty poor or non-existent. More often than not, I need to make up a cable to connect the two devices together.

It’s also essential to test any new gear thoroughly before venturing out on a shoot with it. E.g. you don’t want to turn up on a job with a new radio microphone only to find that you didn’t buy enough batteries to power the transmitters for the whole day, or that they suffer badly from RF interference. If you must use new kit on a shoot, make sure that you have some tried and tested older units with you, just in case the new ones aren’t up to scratch. A few years ago I bought a new radio mic system which boasted incredible range and on-board recording capability. I tested it out before the job began, and things seemed to be OK. However, as soon as I used them on location in Burma, I discovered the range was very poor and so I had to resort back to using my trusty Lectrosonics radio mics instead.

I have only owned one boom pole in my entire 30-year career; a 3-section Panamic mini. That is a testament to how good Panamic boom poles are. I have used it in all conditions, from minus 50C Siberian winters to 45C Saharan summers. It’s also accompanied me 50 metres up into the Amazonian rainforest canopy and 500 metres underground in New Mexico’s Lechuguilla caves, as well as into the highly corrosive atmosphere of Indonesia’s Kawah Ijen sulphur mines, and it has never let me down.

I have only owned one boom pole in my entire 30-year career; a 3-section Panamic mini. That is a testament to how good Panamic boom poles are.

For starters, Panamic boom poles are incredibly lightweight and strong for their size. The diameter of the handle is small enough that it sits comfortably in my hand and the nylon webbing provides essential grip, particularly when working in tropical climates like rainforests (which I work in a lot), where your hands become sweaty. The webbing also acts as a shock absorber and sound dampener, meaning there is absolutely no handling noise, even when it’s fully extended.

Panamic poles can also take a lot of abuse. I worked on all nine of the BBC’s Expeditions series, from Amazon Abyss to Wild Burma. Those series were particularly demanding on both crew and kit. We would often hike for hours to reach our camp, filming en route. On several occasions I would use my boom pole as a walking stick, either to wade through rivers or climb down muddy ravines or up snow-covered mountains. Not once did the nylon bushes jam when I went to use the boom pole again for a sequence.

The other unique feature of mini Panamic boom poles is the threaded base of the handle. As a natural history sound recordist, I find this detail invaluable. I often remove the rubber end cap and attach a homemade screw-in metal spike to the base of my boom pole, which I then stick into the ground, for recording stereo atmospheres. Then I can retreat to a safe distance knowing that the boom pole won’t fall over, if there’s a gust of wind. There’s no need to carry a separate microphone stand anymore when you have a stable monopod like this.

The locking rings require minimal twisting to release a particular section and the nylon bushes work silently. Sometimes when I’m boom-operating on an interview and I need to fully extend the pole, I can actually extend the pole during the interview, without any noise whatsoever.

After each job, I give the carbon fibre sections a wipe down with a damp cloth. It’s amazing how much grime can accumulate on a boom pole during a shoot. Lastly, the Panamic mini is compact enough that I can remove the first section and then store the two parts diagonally inside the lid of my 1600 Pelicase, ready for travelling.